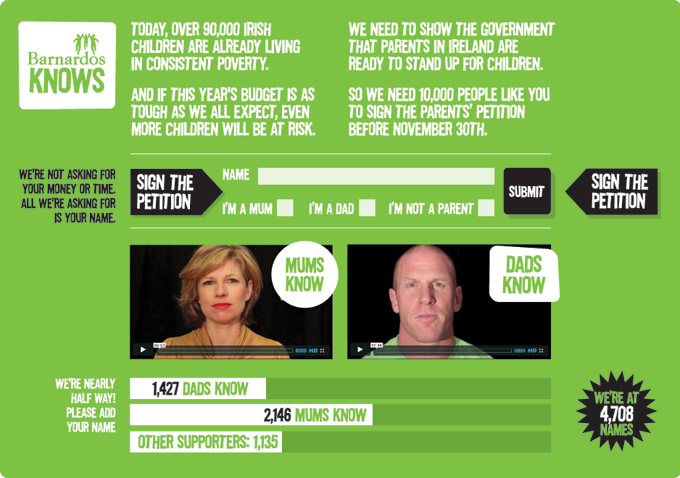 Barnardos Knows Child Poverty campaign aimed to engage parents in the run up to Budget 2012.

What was the problem?

It was the Government’s first budget since coming to power; they had a strong mandate, a horrendous economic legacy to clean up and a Troika to blame for all the tough decisions. The Budget was going to be incredibly tough for the families Barnardos works with and we wanted a way to try to push through the “there’s just no choice” mantra.

What was the solution?

We decided that given how hard it would be to break through the Troika / Government resolve, we wanted to give people, especially parents, the chance to voice their anger and frustration as part of the Budget process. We knew that direct lobbying would have little or no effect and we wanted to get parents involved in trying to make a dent in the austerity agenda.

Our solution was intended to be both short and long term. One of our key objectives was to build a community of engaged supporters who could rally behind future campaigns to increase our capacity to influence change.

Our impact on the Budget was limited, although we did manage (in conjunction with other anti-poverty campaigners) to protect basic Child Benefit rates and alleviate the Universal Social Charge burden for people in the lowest income group.

The campaign achieved great engagement with 11,000 signatures delivered to the Department of Finance a week before the Budget. This was one of the first online campaigns Barnardos ran, and we succeeded in building an email supporter base of over 2000 from scratch on foot of the campaign.

What platforms did you use?

Three months in total, between planning and running campaign. Roughly 15 hours/ week split across 4-5 staff members throughout that time. Creative agency was engaged to develop concept and creative content at the beginning and key points of the campaign

Would you do it again?

Yes, it was a great way to prove the public objection to cuts to children’s payments

Would you do anything differently next time?

Lots! As silly as it seems, we didn’t fully think through our content plan for the lifetime of the campaign. There was a lot of scrabbling around trying to keep it going. We did have celebrity ambassadors involved which was a great way to spread content but next time, I would (and have in subsequent campaigns) have a content plan mapped out in detail with a spread of text, visual and interactive content plotted over the campaign lifetime.

The agency we worked with were brilliant (language.ie) but the content plan really sits with you. Agencies will deliver concepts and creative collateral but few will really help you keep the momentum going once the campaign has launched, it’s not their remit. Thinking that through from the beginning will save a lot of time and panic when you get half-way through and engagement is ebbing!