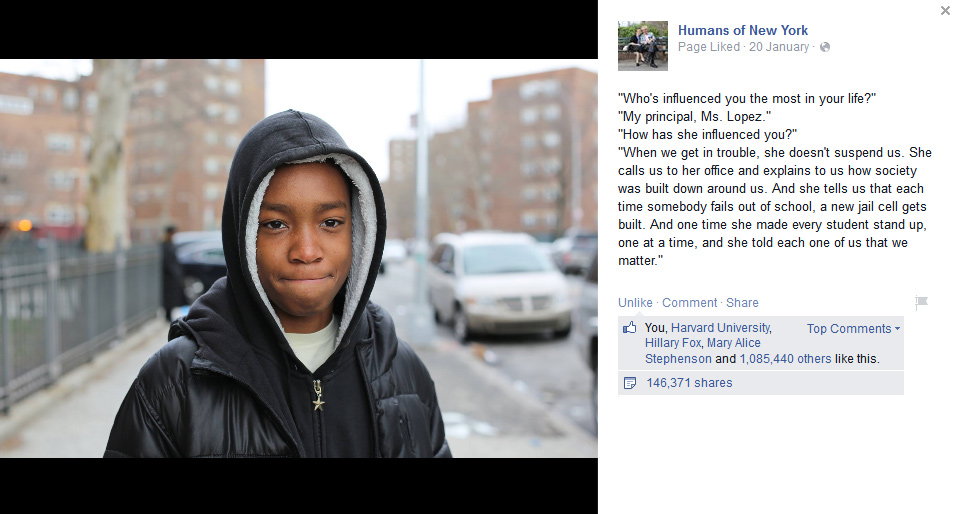 If you have ever had any doubt about the power of digital storytelling: run, don’t walk (or whatever the virtual equivalent is!) to the this post on the Humans of New York Facebook page and scroll left through the photos to see the incredible story of Vidal, Ms Lopez and Mott Hall Bridges Academy.

One young man’s words of appreciation for his school principal sparked a movement to help his fellow students expand their horizons – which in turn became one of Indiegogo’smost successful fundraisers of all time, raising a staggering $1.4 million dollars in less than 20 days.

What really resonated with me about this was how so many meaningful stories came tumbling from that one first story.  Once HONY photographer Brandon Stanton spoke to more people at Mott Hall Bridges Academy, he uncovered further inspiring andheartbreaking stories of the challenges and injustices of the US education system. The school believes that aspirations and a sense of belonging are the most important things to teach young people, and these stories powerfully reflect that.

This campaign started as a story, and then blossomed into a cause.  It’s a great lesson for those of us working on causes – follow the stories.