Debra Ireland is a charity that provides support services to patients and families living with the debilitating skin condition epidermolysis bullosa (EB). Debra is a small organisation but has an excellent brand and public awareness, and they really punch above their weight when it comes to social media.  Cheryl Gunning of Debra generously shared this case study of how they successfully campaigned for a community grant using Facebook.

Along with Solas Dunlavin (a school for autistic children), DEBRA Ireland recently won a Version 1 Community Grant worth €3,500. Much more interesting than the grant however is how we reached 1.3 million people on Facebook.

As part of their CSR policy, Version 1 offer charities the chance to apply for a grant worth €5,000 / €1,000 / €500. Grants are awarded based on videos submitted by charities which are then voted on by the public through an app on Version 1’s Facebook page. 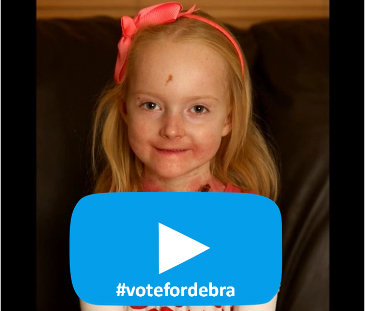 We knew the best way to tell our story was through our amazing patients so that’s what we did – a three minute video telling their story and how the grant would help them.

Voting opened and we were in with a group of five other charities. We had initially been told we would only need around 1,000 votes to win. It soon became clear this wouldn’t be the case.

One other charity, Solas Dunlavin (a local community run school for autistic children), had already jumped ahead of us with over 1,000 votes and a small on/offline community behind them. Two days before the Version 1 campaign kicked off, UTV Ireland Live ran a piece on one of our youngest patients, Casey Connors, which really resonated with our Facebook fans (many asking how they could help). It made sense to link Casey to the video vote. This post kicked off our campaign. 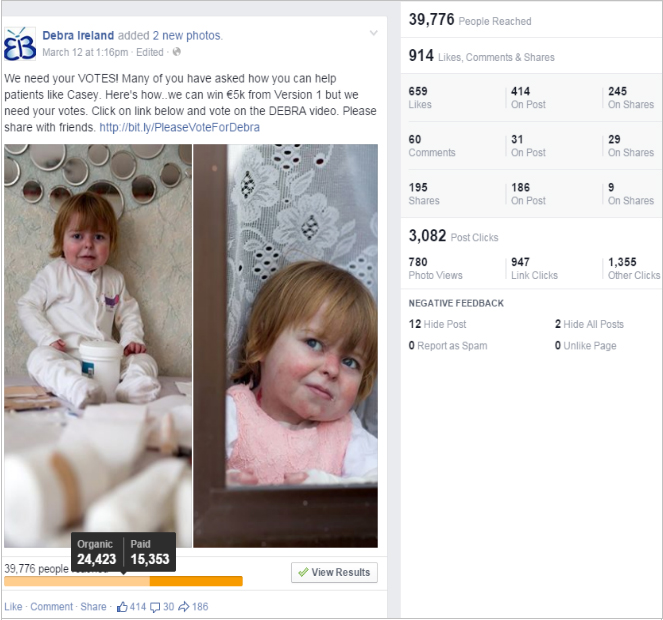 Within a short space of time the post had 414 likes, 30 comments and 186 shares. Momentum began building and people started to get behind the campaign – we weren’t asking them for money, we were just asking them to vote. You could only vote once so we asked supporters to share our posts on their personal Facebook pages and get friends to vote. This worked well for a while but what worked better was people tagging all their friends on our posts so they would get a notification.

The campaign went viral and we went from being 1,000 votes behind to being neck and neck on 10,000 votes each. Version 1 decided to call it a draw a few days before closing date and awarded us a grant worth €3,500 each. They had never seen such a large number of votes in the history of the campaign!

What were the results?

Why did it work?

What did we learn?

Thanks so much to Cheryl for sharing this fantastic success story, and for such useful advice about targeting and building a sense of community.  If you have a case study from an Irish charity that you would like to share for the benefit of the sector, we’d love to publish it – please get in touch at hello@digitalcharitylab.org.