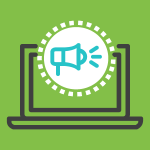 This eloquent rant from the blog of digital producer Martha Henson comes from the world of TV, but it really struck a chord with me and her points equally apply to the non profit world.

Henson talks about the frustrating experience of working on digital projects that are crafted with creativity and care, only to have them flop and disappear unseen because no-one has thought about promotion beyond a few half-hearted social media posts. Sound familiar?  She says that 60-70% of the projects that she’s worked on have suffered from this to some degree.

The particularly maddening thing about this is that many people then use this as a rationale for not doing digital; “writing them off as inherently risky instead of examining what went wrong and trying to learn from mistakes”. As Henson says, “things don’t just magically ‘go viral'”, they need proper promotion and distribution plans.

Someone that I used to work with had some good advice on this – use the 80:20 rule for your projects. Spend 20% of your time and budget on creating the project, and the remaining 80% on getting it out there.