Some major news for non-profits from Facebook – they’re expanding their Facebook Fundraising function to a wider range of countries (including Ireland), and are giving 100% of donations raised directly to the benefiting charities:

Facebook are apparently processing a huge backlog of applications from charities to receive funds on this platform; only a small number have been activated in Ireland so far – but I’m hearing that larger-scale activation is coming very soon.

What does it mean? 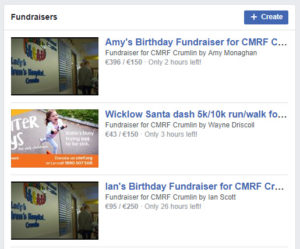 If Facebook is pushing charitable giving, that’s a huge opportunity for non-profits. Lots of money is being raised already – look at the Fundraising tab on CMRF Crumlin’s Facebook page.

Donors can opt in to hear more from an individual charity when they’re donating, so successful Facebook fundraisers should help you to build your list and bring more people into email journeys.

The zero fees angle is going to put serious pressure on fundraising platforms like Just Giving and everydayhero.

Facebook is suggesting to users that they donate their birthday and fundraise for a cause as an alternative to gifts – if this becomes widespread it could be really interesting. Will donating your birthday become a cultural habit? If anyone can influence cultural change, it’s Facebook! (see more on CNN.com)

What are the catches?

Obviously nothing from Facebook should be taken at face value, they are first and foremost a profit-making corporation.  This new feature looks incredibly positive, but if it doesn’t work for them they’ll retire it.

So, as always applies with any third party platforms – don’t rely on it. You won’t get data from all the donors, and you have no control over the platform.  Don’t use it as the only source of your online fundraising. If you do and Facebook shuts it down, you will be, to be blunt, f*cked. Keep doing other online fundraising (through SEO, your Google Grant, organic social, email journeys) and make sure you have a donation function on your own website.

As charities flock towards this new feature, we’ll probably reach a saturation point quite quickly.

If Facebook users are asked for money from random acquaintances every time they log on, the irritation factor may lead to the algorithm suppressing fundraising posts, or the service being discontinued entirely.

The fundraising tools aren’t limited just to charities so competition will be a consideration; the Facebook Fundraising tools also allow people to run personal fundraisers, such as for their own medical expenses.

What should you do?

Get signed up and start the process of getting approved, then activated – it might take a while, so best to do it as quickly as possible. Apply here: https://donations.fb.com/

Once you’re signed up, test and see if your Facebook followers are responsive to doing fundraisers, and see if it’s bringing in new donors.

Keep an eye on developments, this is a new feature and there will be lots of testing, both by Facebook and by digital non-profit experts.

A few places to stay up to date: