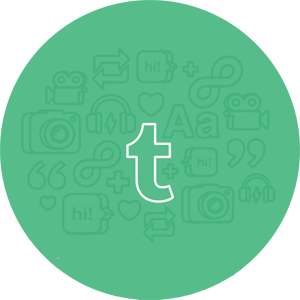 Tumblr is a free micro blogging platform with an emphasis on visuals and creativity. It’s also a social network; as well as setting up your own blog, you can ‘follow’ others on Tumblr, and their content will be seen in your dashboard when you log in.

What can charities use Tumblr for?

Tumblr is great as a source of inspiration; there are lots of fantastic Tumblrs on design and photography for example. It’s also an excellent platform for connecting with a young audience if that describes your service users or supporters, with about 50% of its user base aged under 25. But the real benefit of Tumblr to charities is in publishing. It allows you to set up a blog extremely quickly, and the wide variety of free themes available mean that it works equally well for text or image based sites.

The blogging interface is one of the most intuitive and easy to use that I’ve ever seen, so if you want to get staff or service users writing blogs, it’s a really easy system for them to learn. Its mobile apps make Tumblr extremely quick and easy to update on the move.

It is particularly useful for setting up sites to take public submissions. Tumblr comes with two built in features – Submit and Ask, which allow people using the site to upload their own content and/or to send you questions. Submissions can be images, text, video and audio, and you can turn on moderation so that submissions are approved before being published. The built in functionality is extremely quick to set up and you don’t need to worry about space for hosting files – Tumblr will handle everything.

I wouldn’t recommend using Tumblr as your main website, as the functionality that a proper charity site needs isn’t there, but it’s great for blogs and campaign sites.

Things to be aware of

Are you using Tumblr for your charity? Tell us about your experience in the comments below.